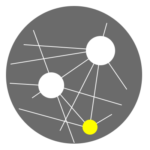 An interdisciplinary approach is crucial when examining the senses. An analysis of the senses crosses disciplinary boundaries as they are embedded in and shaping cultural, political, social, historical, philosophical, artistic and scientific understandings. Different disciplines offer different methodological toolkits to approach the senses which allows a deeper understanding of how the senses underpin urban experience. These are some of the themes that emerged in the discussions of the Sensory Cities network:

The division of the senses into biological or cultural phenomena is questionable as these two dimensions work in conjunction. While senses are embodied and subjective, the way we interpret them and value them is deeply embedded in cultural and social belief systems. The moment we express and interpret sensory experiences they become culturally mediated reflections.

A diversity of methods can capture this, the important feature is that the sensory researcher should be aware and reflexive about the cultural framing of the senses. Here are a few examples from our workshop:

A diverse group in terms of academic disciplines and professions discussed how to study the visual sense in Eigelstein Road. 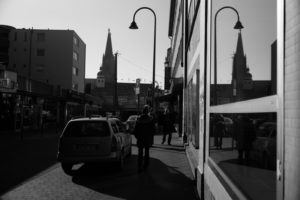 Key points of discussion were:
1. Each of us have different sensory maps of the street depending on our purpose of visiting/seeing it – when focussing on the ‘visual’ for research we all tend to look up beyond street level.

2. Our methods combined visually driven questions and conclusions (picking up clues about the history through the architectural fabric) with textual (attention being drawn to particular bits of the street through knowledge of the historical record) and oral (interest and representation being driving by conversations with inhabitants and visitors) ones.

3. Knowledge makes us see and sense: We all saw things we had not seen before by having our attention drawn to different layers of history and interpretation.

4. Conversation creates community: from a discussion of the museum’s exhibitions and the use of photography it appeared strongly how conversation about objects, memories and uses through the senses can positively create a sense of place and decisions about regeneration.

5. We noted that for all of us our research involves an element of fieldwork and participant observation but we usually do not discuss the process in our writing as part of the discussion of methodologies. We discussed whether this should be done more in historical or art historical work.

6. Visual methods and multi-sensorial awareness: we found that external conditions (a cold, clear Saturday morning with few people and cars in the street) meant there were few sounds, smells or movements distracting from a focus on the visual – and indeed the built-environment rather than the uses of street by people. Awareness of the importance of other senses on this occasion came rather through knowledge of the historical record, memories of other conditions in the street and the discussion with the other groups after the fieldwork. It seemed valid to focus on one sense and then to combine insights.

7. Turning from analysing what we saw to how we would represent it, we noted that given the strong links between senses and imagination – the representation of visual sensing can not only be done visually but also powerfully through narrations and art forms that draw on other senses.

8. We found our existing methods not challenged through the experiment, but we found that we a) literally ‘saw’ more through the interdisciplinary exchange and b) were reflecting on a broader range of question by having the question about the interaction of the senses in our mind. 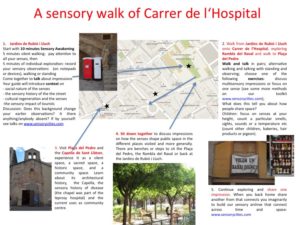 A group of academics from diverse disciplines and different knowledge and attachments to el Raval studies a multi-sensory survey of el Raval from the perspective of the Raval local, tourist, Barcelona visitor.

TOUR ITINARY AND ACTIVITIES:
To think about the different sensory ‘atmospheres’ and different uses of public space we propose to concentrate on the part of the street between Jardins de Rubió i Lluch and Plaça del Pedro, exploring the Jardins de Rubió i Lluch, the Carrer de l’Hospital, the Rambla, the Plaça del Pedro and the Capella de Sant Llàtzer. To stop and talk, the broader open squares seemed most suited.
If this were to become a real tour: we would obviously conduct more in-depth research into and collaborate with inhabitations and local organization and activists.

While developed for, and on the basis of, the sensory landscape of Carrer de l’Hospital, and for (rather individualistic tourists) walking and talking, the principles are adaptable to other media, places and audiences. The format will need to depend on a) the space and b) the aims, but the general format and aims of a small scale, interactive multi-sensorial tour can provide a good starting point to educate researchers, public and policy makers to become more reflective and engaged individuals.

Example 3: Astrid Swenson reflects on the changing meanings of Cologne’s Cathedral bells over the centuries:

Today the sound of the bells is mostly appreciated for its timbre, but different sources on the cathedral bells can show the strong and changing political associations of sounds. The bells were cast from French cannons captured during the 1870 Franco-Prussian war; their ringing was meant to broadcast a message of military triumph and national unity rather than a purely religious one. Melted down in WWI to make cannons again, a new bell was cast in the interwar years. Posters advertised their sound as a ringing message of resistance to French occupation of the Rhineland. After the second world war the sound of the bells became identified with the city’s survival and reconstruction.

Here are some reflections on the confluence of biological perception and cultural understandings:

Marta Tafalla (Barcelona University)
Rethinking the Senses: from the Landscape to the Multisensory Environment

David Howes on the Sensory Revolution

The professional or academic training individuals receive informs and shapes their ‘sensing’ as well as the methodological approaches to urban experience, thus an interdisciplinary and/or cross-professional team aids to a broader understanding and methodological framework to research the senses.

The group chose a public space to stand still for 30 minutes and tried out a range of analogue methods by using paper and pen. Some sketched what they could see and made movement notations; another person drew a list of her immediate sensory impressions. This method tries to get closer to the fluid nature of urban sensing and capture some of the evasive and temporal aspects of urban life.

The group chose an observational method. They suggested to create three maps of Whitechapel Road. The first one maps the senses of the observer on the street: What smellscapes can be identified? What can be seen? What do the touch-scapes consist of? What can be heard? This is complemented by a map with subjective experiences from people interviewed: What are their feelings about the space? Do they experience a hostile, friendly, oppressive, etc environment? The third step is to create a ‘relationship map’ i.e. asking users of space: why do you experience this space as hostile, friendly or oppressive? The aim of this method is to create ‘places of translation’ bringing together the observational maps of the researcher with the experiences of interviewing people using this space.

The group chose to consciously reflect on their interdisciplinary set up by having each researcher observe the same place for 30 minutes by walking around the space. They then met to compare their observations: the disciplinary training informed very different observations of the same place revealing how our disciplinary training shapes how we sense. Agreements and disagreements came up which helped to problematise the subjective positioning of the researcher. This highlights the importance of a) group work; b) the need for interdisciplinarity when researching the senses and c) reflexibity. The researchers’ observations then fed into shaping an interview schedule in which 5 questions are asked to the diversity of users of space from the more general to the more evocative. 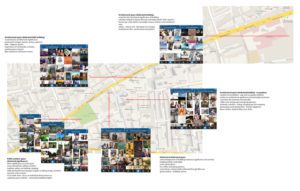 Example 4:  London workshop - Social Media and the making of place:

The group examined the ways in which people use Instagram/twitter to represent themselves in and in front of buildings. The main questions were: What types of filters are used (and what filters are provided by the particular technology?). What kind of sensory atmosphere is displayed through social media? What are important buildings in social media? How are emotional connections to places represented through people’s photographs? The approach provides a visual-emotional account of a site.

Here are different examples of how your training influences and shapes your sensing:

Linked to interdisciplinarity is the theme of cross-professionality. Our network benefited greatly from the interaction between different urban professionals and academic disciplines as we started to understand not just different approaches on how to represent, curate or research the senses but more importantly the constraints and frameworks that urban professional have to work with. In particular for academic sensory research to be applicable in urban planning, museum curation or urban branding, it is useful to reflect how the research can be operationalised for direct, practical uses.

An example of how cross-professionality can be useful has been the research a group of museum curators, sound artist and sociologist conducted to explore the soundscapes of el Raval. This group recorded sounds in different areas of el Raval focusing on thresholds to analyse how power-relations might be framed within ephemeral moments of public life.

Physical thresholds implied dramatic changes in soundscape, switching from noisy to quiet environments (lo-fi vs. hi-fi), allowing us to appreciate sounds and acoustics of different spaces; crossing thresholds also conveyed differences in light, temperature and tactile experiences. The concept of thresholds allowed us to investigate the interfaces of public spaces as articulated by streets, courtyards, squares and alleyways. It offered us the opportunity to heighten our awareness of the different qualities of public space embodied in sensorial experience.

Here are some of the talks from the Sensory Cities network that illustrate this theme:

From doing research in three European cities it became quickly clear that each city (and neighbourhoods or even streets in cities) hosts particular sensory atmospheres and sensory set ups. A comparison allows for differences to become more pronounced but, also, for understanding similarities from the local to the global level and to reflect on processes of emulation and adaptation. We therefore strongly advocate the benefits of comparative research within sensory research – this comparison does not have to be cross-cultural, but can include different spaces with a city, different historical times or even diverse temporal situations.

A variety of methods are useful in this context, from ethnographic based approaches that compare contrast in situ experiences to historical approaches that might study an area’s transformation over time. Below are a few links to relevant talks and literature from our workshops:

Sandra Kurfürst (University of Cologne)
Semiotics of urban space: producing and negotiating meaning in the city

Astrid Swenson (Brunel University)
In the Shadow of the Cathedral: writing sensory histories